Walter Koenig is best known for his roles as ‘Pavel Chekov’ in the original Star Trek series, and as ‘Alfred Bester’ in Babylon 5.

The American actor, born in Chicago, Illinois spent the majority of his childhood in Manhattan, New York. In college he majored in pre-med, receiving a BA in psychology. It was during this time that he was encouraged to try his hand at acting; joining the theatre with fellow classmate, Supa-Star Christopher Lloyd, and beginning a career in stage and screen that would span more than 50 years.

In the 1960s Walter appeared in several television shows, including General Hospital and The Alfred Hitchcock Hour. In 1967 he auditioned for the role of ‘Ensign Pavel Chekov’, navigator on the USS Enterprise, in the original Star Trek television series. His resemblance to musician Davy Jones (of Monkees fame) guaranteed him the role, producers hoping his good looks would appeal to younger
audience and attract more viewers. In the ’90s Walter landed a recurring role as ‘Alfred Bester’ in the television series, Babylon 5. After
filming the third season, the production company applied for an Emmy nomination on his behalf. He reprised the role in the spin-off series, Crusade.

Koenig’s film credits include all of the Star Trek movies featuring the original cast, while his television movie credits include Antony and Cleopatra (as ‘Pompey’), Goodbye, Raggedy Ann, and TheQuestor Tapes. His stage credits include A Midsummer Night’s Dream, Twelve Angry Men, and The Boys in Autumn, a comedy-drama about the reunion of Tom Sawyer and Huck Finn forty years later.
Walter has taught classes in acting and directing privately at UCLA, The Sherwood Oaks Experimental Film College and at the California School of Professional Psychology. Most recently, he has been an instructor at the Actor’s Alley Repertory Company in Los Angeles, California.

Walter released his autobiography, Warped Factors – A Neurotic’s Guide to the Universe in 1998. 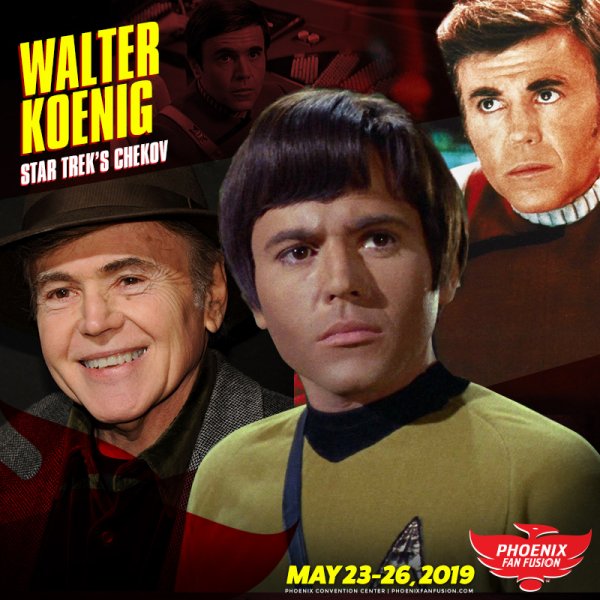