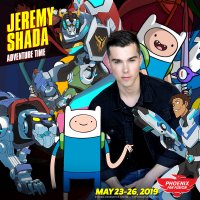 Born in Boise Idaho before relocating to Los Angeles, Jeremy Shada, the teen behind the voice of Finn on Cartoon Network’s Emmy-nominated series, Adventure Time is showing that he is multifaceted in his talents. After landing acting jobs on hit television series such as, ER, Nip/Tuck, Shark, Cold Case, and Parenthood and recurring roles on Ghost Whisperer and Lost, Jeremy lent his vocals to the hit Sony Pictures film Cloudy with a Chance of Meatballs. Developing a niche for voiceovers, Jeremy was cast as the voice of Robin/Young Robin on the animated series, Batman: The Brave and the Bold before ultimately landing the role of the main character Finn on Adventure Time and then as a series regular on Nick Canon’s live-action sketch comedy series, Incredible Crew where he made the viral video, “Running Errands with my Mom.”

As Jeremy continues working on Adventure Time, Voltron, and Mr. Student Body President, he is also busy working on a number of other animated and live action shows being released in 2018, and 2019. Along with pursuing his acting, he is also pursuing his life long love for music. Singing since the age of six and playing the bass since 12, Jeremy has utilized much of his spare time honing his skills. Forming a band alongside his brother Zack Shada and friends, Seth Renken, and John Spicer entitled Make Out Monday, Jeremy “acts” as co-lead
singer, and bass player showcasing his rapping abilities and offering his fans or “Shadanators” as they call themselves, another side of himself. The band was just recently signed by Sharp Tone Records, and Warner Bros Distribution with their new album “Visions of Hollywood”.