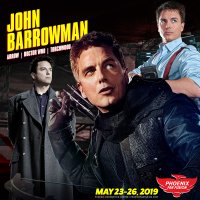 John Barrowman is an Entertainer with a capital E. He sings, he dances, he acts, he presents, he judges – he is a unique talent in the entertainment industry on both sides of the Atlantic. John can currently be seen in the regular role of Malcolm Merlyn (aka The Dark Archer) in the hit American drama series Arrow, based on the Green Arrow comic books. The show has been a huge success all over the world, and is aired in the UK on Sky 1 and on the CW network in the USA. He has appeared in all four series of the show. He subsequently guested as Malcolm Merlyn in The Flash, and has also guested on the CW’s hit historical drama Reign. Having guested on the hit American political drama Scandal for the ABC network, he hosted a major new entertainment series for the network, Sing Your Face Off. In the UK on Channel 4 he hosted Superstar Dogs (a game show for dogs) and The Small Animal Hospital with John Barrowman, which followed the work of Glasgow University Veterinary Hospital. He hosted two series of the BBC1 game show Pressure Pad and has hosted The National Lottery Awards on BBC1 three times.