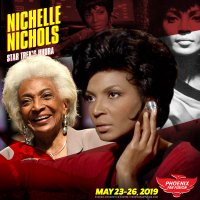 Prior to being cast as Lt. Uhura in Star Trek, Nichelle Nichols had guested on Gene Roddenberry’s first series, The Lieutenant.

Nichols toured the U.S., Canada, and Europe as a singer with both the great Duke Ellington and the Lionel Hampton bands. On the West Coast, she appeared in “Roar of the Grease Paint, Smell of the Crowd,” “For My People,” and garnered high praise for her performance in the James Baldwin play, “Blues for Mr. Charlie.”

Nichelle was then cast on Star Trek. At the end of its first season, Nichols was thinking seriously of leaving the show, but a chance and moving meeting with Martin Luther King changed her mind. He told her she couldn’t give up—that she was a vital role model for young black women in America. She also appeared in six Star Trek movies and she also provided the voice for Lt. Uhura on the Star Trek animated series in 1974-75.

Nichelle was awarded her much deserved a star on the Hollywood Walk of Fame on January 9, 1992. Just a few weeks before she became the first African-American to place her handprints and signature in the cement walk at the famous Grauman’s Chinese Theater. Using her Star Trek fame to bring good back to the world, Nichelle, at the behest of NASA, led a national campaign to recruit the first women and minorities into the space program. Her personal recruits include Mae Jemison, the first African-American woman to travel in space, and Charles Bolden, the current administrator of NASA.