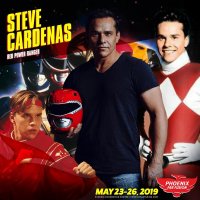 Steve Cardenas made his mark in Hollywood as Rocky, the Red Power Ranger in Mighty Morphin Power Rangers. He later became the Blue Ranger for Power Rangers Zeo. He has filmed over 120 episodes and two Power Ranger motion pictures.

He is also an accomplished martial artist who holds a 5th-degree black belt in American Tae Kwon Do & black belt in Brazilian Jiu-Jitsu (BJJ). With 28 years of martial arts experience, Steve has won a multitude of awards and honors.